Eggs in the Coffee, Sheep in the Corn 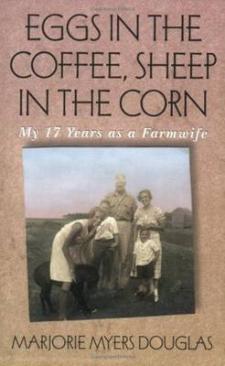 Tears of frustration and loneliness more than once filled the eyes of Marjorie Myers Douglas as she valiantly coped with her new status as a farmwife. Life on a western Minnesota stock ranch in the years during and after World War II was, after all, a far cry from growing up in her parents' Minneapolis home community of academics and her years as a medical social worker in New York City and St. Paul. It all began in 1943 as a two-year plan to help Don's ill father avoid losing the 1,200-acre farm. With World War II pulling able-bodied men into the military, it was nearly impossible to find good farmhands, and Don felt an obligation to contribute to his father's physical and economic recovery from a severe heart attack. Leaving their modern suburban house behind, Marjorie, Don, and baby Anne moved their worldly goods to the simple farmhouse some three miles from the little town of Appleton. For Marjorie it was more a challenge than just a change - a challenge that stretched far beyond the two years into seventeen!
In Eggs in the Coffee, Sheep in the Corn Marjorie Douglas tells how she faced the challenge and came out on top: raising three babies in a house with no running water; learning to understand and live with a demanding father-in-law; providing an ever-ready supply of coffee to go with endless lunches, dinners, and suppers; nurturing peonies for the touch of beauty she needed; making new friends and playing whist; establishing working relationships with the farm animals; finding some satisfaction in her own PTA and church work; keeping the sheep out of the raspberries; canning fifty quarts of rhubarb sauce; getting acquainted with German prisoners of war; butchering eighty-fivechickens. With sharp wit and quiet wisdom, Douglas offers a candid view of life in rural Minnesota from 1943 to 1960. Her stories will ring true to anyone who has ever experienced farm life and will pleasantly bring understanding to anyone who hasn't.