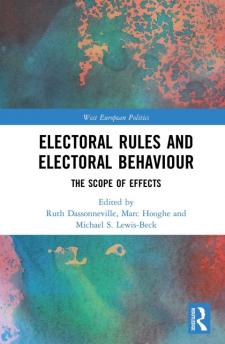 Across representative democracies, there is a strong variation in the rules that govern the electoral process. A classic insight in political science is that these rules, e.g., the presence of a majoritarian or a proportional system have a profound effect on the way a democracy functions. We know less however, about the way voters actually respond to these electoral rules. This kind of effect presupposes that voters not only are aware of the electoral system, but also that they adapt to the incentives offered by the system. In this volume, a group of international scholars investigate whether this is indeed the case. The various chapters in this volume deal with the effect of proportionality, mixed-member systems, compulsory voting and preferential voting. The chapters are based on recent data and state-of-the-art methods. The introduction confronts the findings of the various chapters with the allegedly universal validity of vote choice models in the literature. The research presented in this volume mainly deals with elections in Europe, but the findings speak to the broader community of electoral scholars. The chapters originally published as a special issue in West European Politics.