Electroweak Physics at LEP and LHC 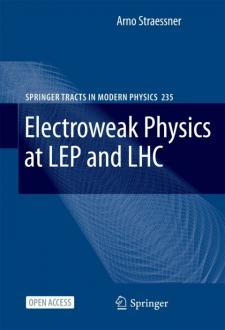 During more than 10 years, from 1989 until 2000, the LEP accelerator and the four LEP experiments, ALEPH, DELPHI, L3 and OPAL, have taken data for a large amount of measurements at the frontier of particle physics. The main outcome is a thorough and successful test of the Standard Model of electroweak interactions. Mass and width of the Z and W bosons were measured precisely, as well as the Z and photon couplings to fermions and the couplings among gauge bosons. The rst part of this work will describe the most important physics results of the LEP experiments. Emphasis is put on the properties of the W boson, which was my main research eld at LEP. Especially the precise determination of its mass and its couplings to the other gauge bosons will be described. Details on physics effects like Colour Reconnection and Bose-Einstein Correlations in W-pair events shall be discussed as well. A conclusive summary of the current electroweak measurements, including low-energy results, as the pillars of possible future ndings will be given. The important contributions from Tevatron, like the measurement of the top quark and W mass, will round up the present day picture of electroweak particle physics.