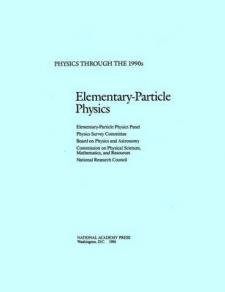 Part of the Physics in a New Era series of assessments of the various branches of the field, Elementary-Particle Physics reviews progress in the field over the past 10 years and recommends actions needed to address the key questions that remain unanswered. It explains in simple terms the present picture of how matter is constructed. As physicists have probed ever deeper into the structure of matter, they have begun to explore one of the most fundamental questions that one can ask about the universe: What gives matter its mass? A new international accelerator to be built at the European laboratory CERN will begin to explore some of the mechanisms proposed to give matter its heft. The committee recommends full U.S. participation in this project as well as various other experiments and studies to be carried out now and in the longer term.