The Emergence of Modern Central Banking from 1918 to the Present 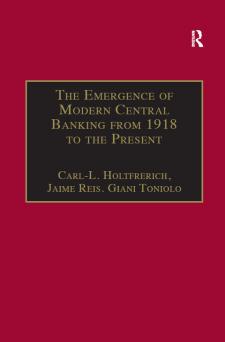 The twentieth century has seen the rise of modern central banking. At its close, it is also witnessing the first steps in the decline of the role of some of the most famous of these institutions. In this volume, some of the world's best known specialists examine the process whereby central banks emerged and asserted themselves within the economic and political spheres of their respective countries. Although the theory and the political economy that presided over their creation did not show great divergence across borders, a considerable institutional variety was nevertheless the result. Among the many factors responsible for this diversity, attention is drawn here not only to the idiosyncrasies of domestic financial systems and to the occurrence of political shocks with major monetary repercussions, such as wars, but also to the peculiarities of each economy and of the political and social climate reigning at the time when central banks were created or formalized. The twelve essays cover European, Asian and American experiences and many of them use a comparative approach.