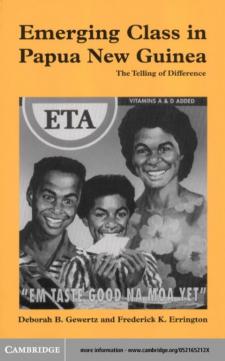 This accessible 1999 study of social class in contemporary Papua New Guinea deals with the new elite, its culture and its institutions, and its relationship to the broader society. The Papua New Guinea described here is not a place of exotic tribesmen, but a modernising society, shaped by global forces, and increasingly divided on class lines. The authors describes the life-style of the elite Wewak, a typical commercial centre, their golf clubs and Rotary gatherings, and bring home the ways in which differences of status are created, experienced and justified. In a country with a long tradition of egalitarianism, it has become at once possible and plausible for relatively affluent 'nationals' to present themselves in a wide range of contexts as fundamentally superior to 'bushy' people, to blame the poor for their misfortunes, and to turn their backs on their less successful relatives.