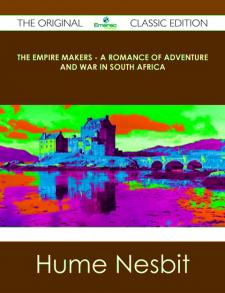 Finally available, a high quality book of the original classic edition of The Empire Makers - A Romance of Adventure and War in South Africa. It was previously published by other bona fide publishers, and is now, after many years, back in print.

This is a new and freshly published edition of this culturally important work by Hume Nesbit, which is now, at last, again available to you.

Get the PDF and EPUB NOW as well. Included in your purchase you have The Empire Makers - A Romance of Adventure and War in South Africa in EPUB AND PDF format to read on any tablet, eReader, desktop, laptop or smartphone simultaneous - Get it NOW.

Enjoy this classic work today. These selected paragraphs distill the contents and give you a quick look inside The Empire Makers - A Romance of Adventure and War in South Africa:

This uncle told him kindly, but frankly, however, in his letter, that if he cared to go anywhere else for the present, it would be as well, for Australia could not hold out much-prospect for a penniless young man for some years yet to come.

...“I have made some arrangements with my own bank, and can let you have a lump sum of say five hundred pounds on your note of hand, only if I do this it will mean drawing your income until you are of age.”

...“Well,” at last observed Clarence, with a lisping drawl; he always spoke slow and lazy-like when primed up for fighting—“well, not being in Johannesburg during the time you speak about, Stephanus Groblaar, I cannot contradict you as to the colour of their flag; yet if I had been, I think I’d have done my best, young as I am, to show that there was an equal mixture of red and blue as well as white about it.”