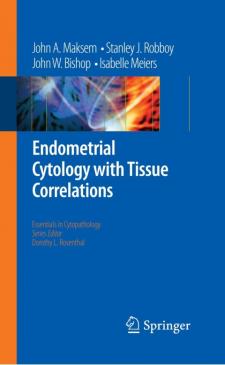 As compared with cytology’s use in other organ systems, direct cytological examination of the endometrium is not a widely practiced diagnostic procedure. This is an anomaly, because the endometrium is exceedingly available for cytological sampling, cytological sampling is comparably simple to perform, and, from the patient’s perspective, it is a gentle procedure as compared to other methods of specimen attainment. Over the years, as we personally gained more and more experience with specimen acquisition, processing and interpretation, we have come to look upon endometrial cytology as an effective method for ensuring endometrial normalcy and discovering and diagnosing malignant and premalignant states. In comparing endometrial cytology to endometrial biopsy, we have found that, in samples obtained by individuals experienced in specimen collection, cytology outperforms outpatient biopsy with regard to the patient’s tolerance of the procedure, adequacy of sampling among postmenopausal women, and detection of occult neoplasms. By devising a highly effective technical strategy to ensure the simultaneous creation of cell blocks and cytological samples from a single collection (that is detailed in the technical appendix of this work), we have moved endometrial brush collection into an arena of significance equaling—indeed exceeding—other methods of specimen collection and interpretation. Cytology, even in the absence of cell blocks, performs equally as well as biopsy in detecting outspoken hyperplasia or carcinoma. If nothing else, by reliably identifying benign, normal endometrial states, it serves to exclude more than 70% of women from unnecessary follow up testing with a high degree of confidence. Because brush sampling of the endometrium is limited to a depth of 1.5 to 2 mm, the method is not definitive for the detection of endometrial polyps, fibroids, stromal tumors, or tumors of the uterine wall musculature. However, endometrial cytology is useful for detecting benign estrogen-excess states such as disordered proliferation and various degrees of benign hyperplasia, for separating these states from frankly neoplastic states such as EIN and cancer, but not for subclassifying benign hyperplastic states in the absence of cell block preparations. When endometrial brushing with liquid fixation is used in conjunction with other techniques such as immunohistochemistry, concomitant biopsy or, more practically, hysteroscopy or sonohysterography, endometrial benignancy can be assured with a very high level of confidence (> 99%); indeed, manufacturing concomitant cell blocks of endometrial tissue fragments and using immunohistochemistry in selected cases significantly enhances the diagnostic specificity of the technique. In a woman with a patent cervix, endometrial brushing successfully collects material, even from late postmenopausal atrophic endometrium. It allows for the detection of serious diseases such as endometrial intraepithelial carcinoma under conditions where suction biopsy might miss or otherwise obviate the diagnosis. This work focuses on the background, collection technique, and reliability of endometrial cytology; it then overviews diagnostic criteria and diagnostic pitfalls encountered in the day-to-day practice of the art. Since endometrial cytology interpretation relies on intuiting tissue patterns from cytology preparations, a great deal of time is spent on cytohistological correlations and, where effective as part of a diagnostic strategy, on ancillary immunohistochemical staining. The discussion moves from normal states of the endometrium, through otherwise benign changes induced by an altered hormonal milieu or surface irritants, into neoplastic premalignant and malignant endometrial conditions. Finally, fixative and slide preparation techniques, that we deem as expeditious while serving to get the most information out of an endometrial cytology collection, are discussed in detail for the benefit of those who wish to recapitulate our work in their own practice.