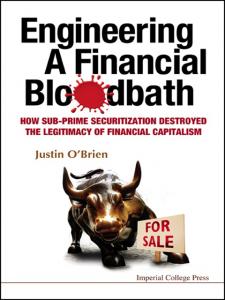 In July 2007, the then chief executive of Citigroup, Charles Prince, captured the hubris of a market dangerously addicted to debt: &quote;When the music stops, in terms of liquidity, things will be complicated. But as long as music is playing, you have got to get up and dance. We're still dancing.&quote; By the end of the year, Mr Prince was forced to resign along with some of the most influential bankers on Wall Street. Global investment houses in the United States and Europe were forced to turn to sovereign wealth funds for emergency funding. Their rescue comes at a significant material and reputational price.This book investigates the origins and implications of the securitization crisis, described by the chief executive of ANZ as a &quote;financial services bloodbath&quote;. Based on extensive interviews, it offers an integrated series of case studies drawn from the United States, the United Kingdom and Australia. A central purpose is to not only chart what went wrong within the investment houses and why the regulatory systems failed, but also provide policy guidance. The book therefore combines the empirical with the normative. In so doing, it provides a route map to navigate one of the most significant financial and regulatory failures in modern times.