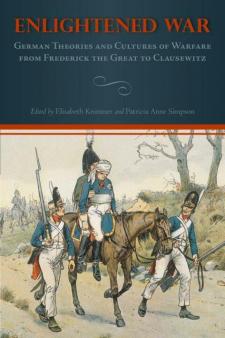 Enlightened War investigates the multiple and complex interactions between warfare and Enlightenment thought. Although the Enlightenment is traditionally identified with the ideals of progress,eternal peace, reason, and self-determination, Enlightenment discourse unfolded during a period of prolonged European warfare from the Seven Years' War to the Napoleonic conquest of Europe. The essays in this volume explore the palpable influence of war on eighteenth-century thought and argue for an ideological affinity among war, Enlightenment thought, and its legacy.
The essays are interdisciplinary, engaging with history, art history, philosophy, military theory, gender studies, and literature and with historical events and cultural contexts from the early Enlightenment through GermanClassicism and Romanticism. The volume enriches our understanding of warfare in the eighteenth century and shows how theories and practices of war impacted concepts of subjectivity, national identity, gender, and art. It also sheds light on the contemporary discussion of the legitimacy of violence by juxtaposing theories of war, concepts of revolution, and human rights discourses.