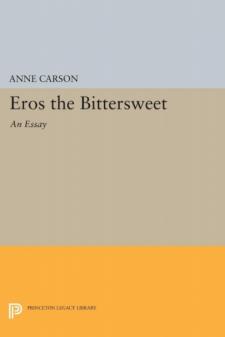 The insights presented in the volume are many and wide-ranging, recognizably in tune with the subtlest modern discussions of desire (such as triangulation. or loving what others love), yet offering new solutions to old problems, like the proper interpretation of Plato's Phaedrus. On the frequently discussed effect of literacy on Greek civilization, the book offers a fresh view: it was no accident that the poets who invented Eros were also the first readers and writers of the Western literate tradition. Originally published in 1986. The Princeton Legacy Library uses the latest print-on-demand technology to again make available previously out-of-print books from the distinguished backlist of Princeton University Press. These editions preserve the original texts of these important books while presenting them in durable paperback and hardcover editions. The goal of the Princeton Legacy Library is to vastly increase access to the rich scholarly heritage found in the thousands of books published by Princeton University Press since its founding in 1905.