The Essays of Arthur Schopenhauer; The Art of Controversy 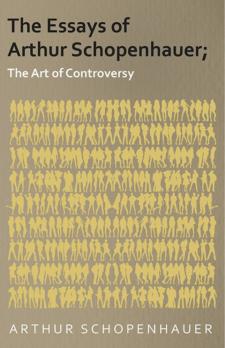 This early work by Arthur Schopenhauer was originally published in 1830 and we are now republishing it with a brand new introductory biography. The contents of 'The Essays of Arthur Schopenhauer; The Art of Controversy,' are drawn entirely from his posthumous papers, edited and translated by T. Bailey Saunders. Arthur Schopenhauer was born on 22 February 1788, in Gdansk, a Polish city on the Baltic coast. His parents were both descendants of wealthy German Patrician families, and moved to Hamburg shortly after the Prussians annexed Gdansk in 1793. Schopenhauer enrolled at the University of Göttingen in 1809 and it was here that he first studied metaphysics and psychology, under the well respected and polemical anti-Kantian philosopher, Gottlob Ernst Schulze. Schopenhauer began his most famous work, Die Welt als Wille und Vorstellung ('The World as Will and Representation') in 1814, and published it five years later. This text has become a centre-piece of modern philosophy, in which the author argues that the world is driven by a continually dissatisfied 'will', one which is continually seeking satisfaction. It includes aspects of epistemology, ontology, aesthetics, ethics and a strong criticism of the Kantian approach to knowledge.