Essays on a Mature Economy 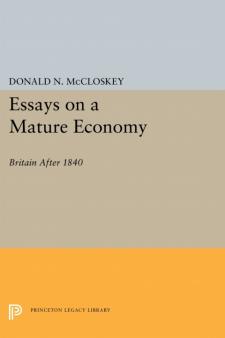 Debating the promises and limits of the &quote;new economic history,&quote; seventeen economists and economic historians look at Great Britain, from the peak of her industrial dominance in 1840 to her eclipse by the surging economies of Germany and the United States. Their discussion brings a new methodological challenge to the field of economic history and a new interpretation of the British economy in the nineteenth and early twentieth centuries.Originally published in 1972.The Princeton Legacy Library uses the latest print-on-demand technology to again make available previously out-of-print books from the distinguished backlist of Princeton University Press. These editions preserve the original texts of these important books while presenting them in durable paperback and hardcover editions. The goal of the Princeton Legacy Library is to vastly increase access to the rich scholarly heritage found in the thousands of books published by Princeton University Press since its founding in 1905.