The Essence of Truth 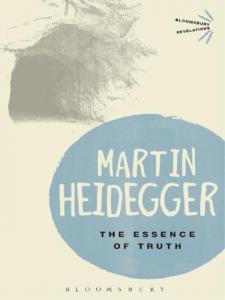 MartinHeidegger is one of thetwentieth century's most important philosophers, renowned for his explorationof &quote;the question of being&quote;. He was Professor of Philosophy at the Universitiesof Marburg and Freiburg and his influence is felt in such diverse subjects asphilosophy, theology, literary theory and artificial intelligence. The Essence of Truth is an examination of the most fundamental themein Heidegger's philosophy: the difference between truth as 'the unhiddenness ofbeings' and truth as 'the correctness of propositions'. Based on a courseof lectures delivered at the University of Freiburg in 1932, the book presents Heidegger's original analysis of Plato's philosophy and represents an important discussion of a fundamental subject of philosophy through the ages.