Ethics of Reading in Manuscript Culture 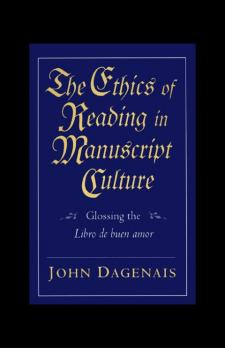 Reexamining the roles played by author, reader, scribe, and text in medieval literary practice, John Dagenais argues that the entire physical manuscript must be the basis of any discussion of how meaning was made. Medievalists, he maintains, have relied too heavily on critical editions that seek to create a single, definitive text reflecting an author's intentions. In reality, manuscripts bear not only authorial texts but also a variety of elements added by scribes and readers: glosses, marginal notes, pointing hands, illuminations, and fragments of other, seemingly unrelated works. Using the surviving manuscripts of the fourteenth-century Libro de buen amor, a work that has been read both as didactic treatise on spiritual love and as a celebration of sensual pleasures, Dagenais shows how consideration of the physical manuscripts and their cultural context can shed new light on interpretive issues that have puzzled modern readers.Dagenais also addresses the theory and practice of reading in the Middle Ages, showing that for medieval readers the text on the manuscript leaf, including the text of the Libro, was primarily rhetorical and ethical in nature. It spoke to them directly, individually, always in the present moment. Exploring the margins of the manuscripts of the Libro and of other Iberian works, Dagenais reveals how medieval readers continually reshaped their texts, both physically and ethically as they read, and argues that the context of medieval manuscript culture forces us to reconsider such comfortable received notions as &quote;text&quote; and &quote;literature&quote; and the theories we have based upon them.