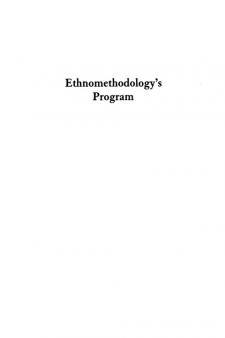 Since the 1967 publication of Studies in Ethnomethodology, Harold Garfinkel has indelibly influenced the social sciences and humanities worldwide. This new book, the long-awaited sequel to Studies, comprises Garfinkel's work over three decades to further elaborate the study of ethnomethodology. 'Working out Durkheim's Aphorism,' the title used for this new book, emphasizes Garfinkel's insistence that his position focuses on fundamental sociological issues-and that interpretations of his position as indifferent to sociology have been misunderstandings. Durkheim's aphorism states that the concreteness of social facts is sociology's most fundamental phenomenon. Garfinkel argues that sociologists have, for a century or more, ignored this aphorism and treated social facts as theoretical, or conceptual, constructions. Garfinkel in this new book shows how and why sociology must restore Durkheim's aphorism, through an insistence on the concreteness of social facts that are produced by complex social practices enacted by participants in the social order. Garfinkel's new book, like Studies, will likely stand as another landmark in sociological theory, yet it is clearer and more concrete in revealing human social practices.