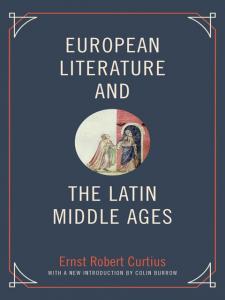 Published just after the Second World War, European Literature and the Latin Middle Ages is a sweeping exploration of the remarkable continuity of European literature across time and place, from the classical era up to the early nineteenth century, and from the Italian peninsula to the British Isles. In what T. S. Eliot called a &quote;magnificent&quote; book, Ernst Robert Curtius establishes medieval Latin literature as the vital transition between the literature of antiquity and the vernacular literatures of later centuries. The result is nothing less than a masterful synthesis of European literature from Homer to Goethe. European Literature and the Latin Middle Ages is a monumental work of literary scholarship. In a new introduction, Colin Burrow provides critical insights into Curtius's life and ideas and highlights the distinctive importance of this wonderful book.