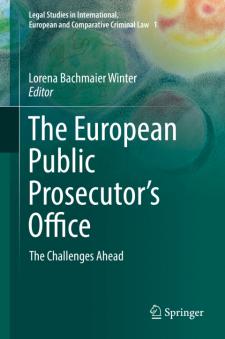 This book explores the European Public Prosecutor’s Office (EPPO), the creation of which was approved in the Regulation adopted by the Justice and Home Affairs (JHA) Council on 12 October 2017.  The EPPO will be an independent European prosecution office tasked with investigating and prosecuting those crimes defined in the recently adopted Regulation 2017/1371 on combating fraud against the Union’s financial interests by means of criminal law. As such, it will be a new actor on the EU landscape, governed by the principle of loyal cooperation with the national prosecuting authorities. This work clarifies some of the challenges that member states will have to face when dealing with a supranational prosecution authority. In addition, it provides guidelines on how to implement the present Regulation while respecting the fundamental rights of defendants in criminal proceedings. The book is of special interest in so far as the analysis and perspective of academics is completed with the contributions of legal experts who have either been involved in the negotiations to establish the European public prosecutor or will be closely linked, as public prosecutors, to the functioning of the future European public prosecutor’s office.