The Evolution of a Nation 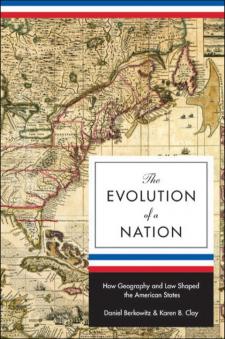 Although political and legal institutions are essential to any nation's economic development, the forces that have shaped these institutions are poorly understood. Drawing on rich evidence about the development of the American states from the mid-nineteenth to the late twentieth century, this book documents the mechanisms through which geographical and historical conditions--such as climate, access to water transportation, and early legal systems--impacted political and judicial institutions and economic growth. The book shows how a state's geography and climate influenced whether elites based their wealth in agriculture or trade. States with more occupationally diverse elites in 1860 had greater levels of political competition in their legislature from 1866 to 2000. The book also examines the effects of early legal systems. Because of their colonial history, thirteen states had an operational civil-law legal system prior to statehood. All of these states except Louisiana would later adopt common law. By the late eighteenth century, the two legal systems differed in their balances of power. In civil-law systems, judiciaries were subordinate to legislatures, whereas in common-law systems, the two were more equal. Former civil-law states and common-law states exhibit persistent differences in the structure of their courts, the retention of judges, and judicial budgets. Moreover, changes in court structures, retention procedures, and budgets occur under very different conditions in civil-law and common-law states. The Evolution of a Nation illustrates how initial geographical and historical conditions can determine the evolution of political and legal institutions and long-run growth.