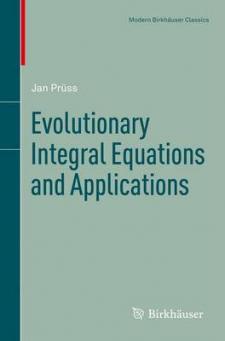 This book deals with evolutionary systems whose equation of state can be formulated as a linear Volterra equation in a Banach space. The main feature of the kernels involved is that they consist of unbounded linear operators. The aim is a coherent presentation of the state of art of the theory including detailed proofs and its applications to problems from mathematical physics, such as viscoelasticity, heat conduction, and electrodynamics with memory. The importance of evolutionary integral equations - which form a larger class than do evolution equations - stems from such applications and therefore special emphasis is placed on these. A number of models are derived and, by means of the developed theory, discussed thoroughly. An annotated bibliography containing 450 entries increases the book's value as an incisive reference text.

This excellent book presents a general approach to linear evolutionary systems, with an emphasis on infinite-dimensional systems with time delays, such as those occurring in linear viscoelasticity with or without thermal effects. It gives a very natural and mature extension of the usual semigroup approach to a more general class of infinite-dimensional evolutionary systems. This is the first appearance in the form of a monograph of this recently developed theory. A substantial part of the results are due to the author, or are even new. (...) It is not a book that one reads in a few days. Rather, it should be considered as an investment with lasting value.
(Zentralblatt MATH)

In this book, the author, who has been at the forefront of research on these problems for the last decade, has collected, and in many places extended, the known theory for these equations. In addition, he has provided a framework that allows one to relate and evaluate diverse results in the literature.
(Mathematical Reviews)

This book constitutes a highly valuable addition to the existing literature on the theory of Volterra (evolutionary) integral equations and their applications in physics and engineering. (...) and for the first time the stress is on the infinite-dimensional case.
(SIAM Reviews)