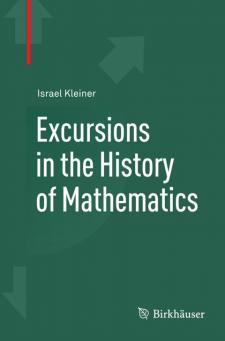 Excursions in the History of Mathematics

This book comprises five parts. The first three contain ten historical essays on important topics: number theory, calculus/analysis, and proof, respectively.  Part four deals with several historically oriented courses, and Part five provides biographies of five mathematicians who played major roles in the historical events described in the first four parts of the work. Each of the first three parts—on number theory, calculus/analysis, and proof—begins with a survey of the respective subject and is followed in more depth by specialized themes. Among the specialized themes are:  Fermat as the founder of modern number theory, Fermat’s Last Theorem from Fermat to Wiles, the history of the function concept, paradoxes, the principle of continuity, and an historical perspective on recent debates about proof. The fourth part contains essays describing mathematics courses inspired by history. The essays deal with numbers as a source of ideas in teaching, with famous problems, and with the stories behind various "great" quotations. The last part gives an account of five mathematicians—Dedekind, Euler, Gauss, Weierstrass, and Hilbert—whose lives and work we hope readers will find inspiring. Key features of the work include: * A preface describing in some detail the author's ideas on teaching mathematics courses, in particular, the role of history in such courses; * Explicit comments and suggestions for teachers on how history can affect the teaching of mathematics; * A description of a course in the history of mathematics taught in an In-Service Master's Program for high school teachers; * Inclusion of issues in the philosophy of mathematics; * An extensive list of relevant references at the end of each chapter. Excursions in the History of Mathematics was written with several goals in mind: to arouse mathematics teachers’ interest in the history of their subject; to encourage mathematics teachers with at least some knowledge of the history of mathematics to offer courses with a strong historical component; and to provide an historical perspective on a number of basic topics taught in mathematics courses.