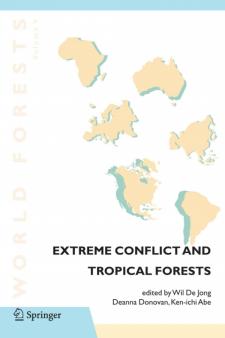 There are many compelling reasons for policymakers to pay more attention to forested regions and invest more resources there. Forests provide valuable products and en- ronmental services and several hundred million extremely poor people live near them. Perhaps the most compelling reason of all, however, is that unless policymakers take forest governance seriously and respond better to the needs of the people living there, these regions will continue to be breeding grounds for violent con?ict, banditry, and illicit crops. From Nicaragua's Atlantic Coast to the jungles of Cambodia, there are several dozen countries around the world that have experienced severe breakdowns in law and order in their forested regions. In many of these cases those breakdowns had widespread economic, social, and political consequences that have threatened entire societies. You would think that after all of the suffering over the last few decades in the forested regions of Colombia, Peru, Mexico, Guatemala, the two Congo's, Liberia, Mozambique, Philippines, Solomon Islands, Nepal, Angola, Rwanda, Nicaragua, Cote E d'Ivoire, Myanmar, Bangladesh, India, Sri Lanka, Indonesia, Sierra Leone, Senegal, Sudan, Uganda, and Vietnam people would begin to take note. After all, they don't call it jungle warfare for nothing.