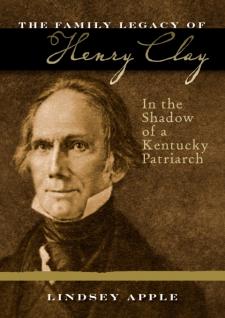 The Family Legacy of Henry Clay

Known as the Great Compromiser, Henry Clay earned his title by addressing sectional tensions over slavery and forestalling civil war in the United States. Today he is still regarded as one of the most important political figures in American history. As Speaker of the House of Representatives and secretary of state, Clay left an indelible mark on American politics at a time when the country's solidarity was threatened by inner turmoil, and scholars have thoroughly chronicled his political achievements. However, little attention has been paid to his extensive family legacy.

In The Family Legacy of Henry Clay: In the Shadow of a Kentucky Patriarch, Lindsey Apple explores the personal history of this famed American and examines the impact of his legacy on future generations of Clays. Apple's study delves into the family's struggles with physical and emotional problems such as depression and alcoholism. The book also analyzes the role of financial stress as the family fought to reestablish its fortune in the years after the Civil War. Apple's extensively researched volume illuminates a little-discussed aspect of Clay's life and heritage, and highlights the achievements and contributions of one of Kentucky's most distinguished families.