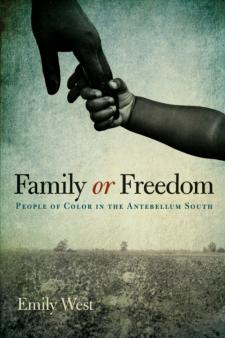 In the antebellum South, the presence of free people of color was problematic to the white population. Not only were they possible assistants to enslaved people and potential members of the labor force; their very existence undermined popular justifications for slavery. It is no surprise that, by the end of the Civil War, nine Southern states had enacted legal provisions for the "voluntary" enslavement of free blacks. What is surprising to modern sensibilities and perplexing to scholars is that some individuals did petition to rescind their freedom.

Family or Freedom investigates the incentives for free African Americans living in the antebellum South to sacrifice their liberty for a life in bondage. Author Emily West looks at the many factors influencing these dire decisions—from desperate poverty to the threat of expulsion—and demonstrates that the desire for family unity was the most important consideration for African Americans who submitted to voluntary enslavement. The first study of its kind to examine the phenomenon throughout the South, this meticulously researched volume offers the most thorough exploration of this complex issue to date.