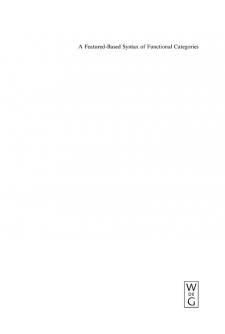 A Feature-Based Syntax of Functional Categories

This book develops ideas of Minimalist syntax to derive functional categories from the partially-ordered features expressed by functional elements, thereby dispensing with functional categories as primitives of the theory. It generalizes attempts to do this in the literature, while drawing significant empirical consequences from general constraints formulated to block overgeneration. The resulting theory of the construction of functional categories is applied to various problems in syntactic analysis and comparative and historical syntax, including variation across Germanic languages in patterns of verb-second and in the occurrence of expletive subjects in existential constructions, verb positions in Old and Middle English, problems regarding the placement of clitic pronouns in Romance languages and Modern Greek, and some previously unexamined structures of reduced clause coordination in colloquial English. Facts from early stages of the acquisition of syntax are shown to follow from the mechanisms for the projection of functional features as functional categories, exercised before all of the features for a language, along with their ordering and feature co-occurrence restrictions, have been acquired. It is observed that child acquisition of functional elements exhibits successive developmental stages, each characterized by the number of clausal functional elements which can be represented together within a clause. This, and facts regarding the lag in development of functional categories by children with specific language impairment, are shown to be not entirely reducible to limitations in working memory or processing capacity, but to depend in part on the growth of representational resources for the projection of functional categories.