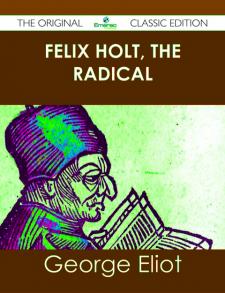 Finally available, a high quality book of the original classic edition of Felix Holt, The Radical. It was previously published by other bona fide publishers, and is now, after many years, back in print.

This is a new and freshly published edition of this culturally important work by George Eliot, which is now, at last, again available to you.

Get the PDF and EPUB NOW as well. Included in your purchase you have Felix Holt, The Radical in EPUB AND PDF format to read on any tablet, eReader, desktop, laptop or smartphone simultaneous - Get it NOW.

Enjoy this classic work today. These selected paragraphs distill the contents and give you a quick look inside Felix Holt, The Radical:

In these midland districts the traveller passed rapidly from one phase of English life to another: after looking down on a village dingy with coal-dust, noisy with the shaking of looms, he might skirt a parish all of fields, high hedges, and deep rutted lanes; after the coach had rattled over the pavement of a manufacturing town, the scenes of riots and trades-union meetings, it would take him in another ten minutes into a rural region, where the neighborhood of the town was only felt in the advantages of a near market for corn, cheese, and hay, and where men with a considerable banking account were accustomed to say that 'they never meddled with politics themselves.' ... It was still easier to see that, for the most part, they resisted the rotation of crops and stood by their fallows: and the coachman would perhaps tell how in one parish an innovating farmer, who talked of Sir Humphrey Davy, had been fairly driven out by popular dislike, as if he had been a confounded Radical; and how, the parson having one Sunday preached from the words, 'Break up your fallow-ground,' the people thought he had made the text out of his own head, otherwise it would never have come 'so pat' on a matter of business; but when they found it in the Bible at home, some said it was an argument for fallows (else why should the Bible mention fallows?), but a few of the weaker sort were shaken, and thought it was an argument that fallows should be done away with, else the Bible would have said, 'Let your fallows lie'; and the next morning the parson had a stroke of apoplexy, which, as coincident with a dispute about fallows, so set the parish against the innovating farmer and the rotation of crops, that he could stand his ground no longer, and transferred his lease.

About George Eliot, the Author:

...An additional factor in her use of a pen name may have been a desire to shield her private life from public scrutiny and to prevent scandals attending her relationship with the married George Henry Lewes, with whom she lived for over 20 years.