Fiesta of the Damned 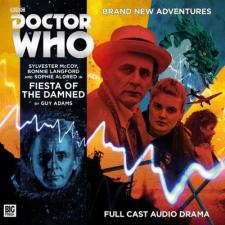 A new adventure for Sylvester McCoy as the Seventh Doctor, alongside Bonnie Langford and Sophie Aldred as 1980s companions Melanie Bush and Ace. In search of "a taste of the real Spain", the TARDIS transports the Doctor, Ace and rejoined crewmember Mel not to sizzling Fuerteventura, or the golden sands of the Costa Brava - but to 1938, amid the horrors of the Spanish Civil War. Having fallen in with a rag-tag column of Republican soldiers, the time and space travellers seek shelter from Franco's bombers in the walled town of Farissa - only to discover themselves besieged by dead men returned to life. Big Finish's main range of Doctor Who stories began in 1999, and has featured television Doctors Peter Davison, Colin Baker, Sylvester McCoy and Paul McGann across its 215 tales. Sylvester McCoy originally played the Doctor in 1987 - 1989, (then again in 1996) while his other work includes Radagast the Brown in Peter Jackson's epic The Hobbit films and is currently winning hearts in The Real Marigold Hotel. Companion Mel Bush is played by Bonnie Langford - a popular actor of stage and screen, currently featuring in BBC's top hit EastEnders.Companion Ace, as played by Sophie Aldred, is popularly regarded as the prototype for the modern companions in the Doctor Who revival which returned to screens from 2005.
CAST: Sylvester McCoy (The Doctor), Bonnie Langford (Mel), Sophie Aldred (Ace), Enzo Squillino Jnr (Juan Romero), Christopher Hatherall (George Newman), Owen Aaronovitch (Antonio Ferrando/Control Unit), Tom Alexander (Luis/Phillipe).