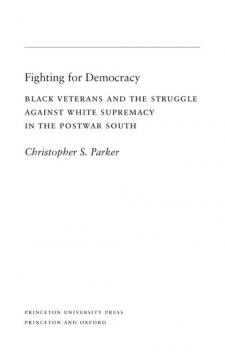 Fighting for Democracy shows how the experiences of African American soldiers during World War II and the Korean War influenced many of them to challenge white supremacy in the South when they returned home. Focusing on the motivations of individual black veterans, this groundbreaking book explores the relationship between military service and political activism. Christopher Parker draws on unique sources of evidence, including interviews and survey data, to illustrate how and why black servicemen who fought for their country in wartime returned to America prepared to fight for their own equality. Parker discusses the history of African American military service and how the wartime experiences of black veterans inspired them to contest Jim Crow. Black veterans gained courage and confidence by fighting their nation's enemies on the battlefield and racism in the ranks. Viewing their military service as patriotic sacrifice in the defense of democracy, these veterans returned home with the determination and commitment to pursue equality and social reform in the South. Just as they had risked their lives to protect democratic rights while abroad, they risked their lives to demand those same rights on the domestic front. Providing a sophisticated understanding of how war abroad impacts efforts for social change at home, Fighting for Democracy recovers a vital story about black veterans and demonstrates their distinct contributions to the American political landscape.