The Final Film of Laurel and Hardy 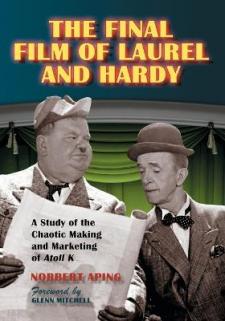 While it once seemed that everything worth knowing had been written about Laurel and Hardy's ill-received final film, the remarkable story behind the planning, development and marketing of ""Atoll K"" has remained strangely unexplored. Consequently, existing details on the cast, crew, locations, and even basic information on running times and release dates were sketchy at best.This work reconstructs the circumstances surrounding this unusual international co-production (""Atoll K"" was a French-Italian film with English-speaking stars). Through lost documents detailing the film's production and funding, previously unreleased behind-the-scenes photos, and a rare interview with French movie star Suzy Delair (Cherie Lamour), the author explores the continuous changes to the film's script during its chaotic production and the final marketing of the film's many different versions (""Atoll K"" was also released as ""Robinson Crusoeland"" in the United Kingdom and as ""Utopia"" in the United States). Several appendices detail alternative sequences and cut scenes in multi-lingual versions of the film, French box-office reports from 1951 to 1952, and a complete filmography.