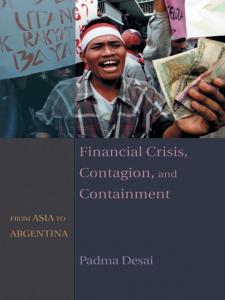 This book provides a sweeping, up-to-date, and boldly critical account of the financial crises that rocked East Asia and other parts of the world beginning with the collapse of the Thai baht in 1997. Retracing the story of Asia's &quote;Crisis Five&quote;--Indonesia, Malaysia, South Korea, the Philippines, and Thailand--Padma Desai argues that the region's imprudently fast-paced opening to the free flow of capital was pushed by determined advocates, official and private, in the global economy's U.S.-led developed center. Turmoil ensued in these peripheral economies, the Russian ruble faltered, and Brazil was eventually hit. The inequitable center-periphery relationship also extended to the policy measures that the crisis-swept economies implemented under International Monetary Fund bailouts, which intensified the downturns induced by the panic-driven outflows of short-term capital. Financial Crisis, Contagion, and Containment examines crisis origin and resolution in a comparative perspective by combing empirical evidence from the most robust economies to the least. Why is the U.S. relatively successful at weathering economic ups and downs? Why is Japan stuck in policy paralysis? Why is the European Central Bank unable to achieve both inflation control and stable growth? How can emerging markets avoid turbulence amid free-flowing speculative capital from private lenders of the developed center? Engaging and nontechnical yet deeply insightful, this book appears at a time when the continuing turmoil in Argentina has revived policy debates for avoiding and addressing financial crises in emerging market economies.