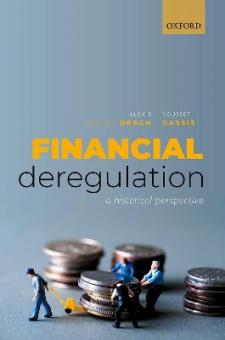 A wave of liberalization swept the developed world at end of the twentieth century. From the 1970s and 1980s onwards, most developed countries have passed various measures to liberalize and modernize the financial markets. Each country had its agenda, but most of them have experienced, to a different extent, a change in regulatory regime. This change, often labeled deregulation and associated with the advent of neoliberalism, was sharply contrasting with the previous
era of the Bretton Woods system, which has sometimes been portrayed as an era of financial repression. On the other hand, a quick glance at financial regulation today - at the amount of paper it produces, at its complexity, at the number of people involved, and at the resources invested in it - is
enough to say that, somehow, there is more regulation today than ever before. In the new system, financial regulation has taken unprecedented importance. As more archival material is becoming available, a better understanding of the fundamental changes in the regulatory environment towards the end of the twentieth century is now possible. What kind of change exactly was deregulation? Did competition between financial regulators lead to a race to the bottom in regulation? Is deregulation
responsible for the recurring financial crises which seem to have characterised the international financial system since the 1980s? The movement towards a more liberal regulatory regime was neither linear nor simple. This book - a collection of chapters studying deregulation in various countries and
contexts - examines the national and international pathways of deregulation by providing an in-depth analysis of a short but crucial period in a few major countries.