A First Course in Discrete Mathematics 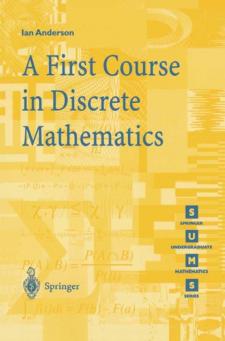 Drawing on many years'experience of teaching discrete mathem atics to students of all levels, Anderson introduces such as pects as enumeration, graph theory and configurations or arr angements. Starting with an introduction to counting and rel ated problems, he moves on to the basic ideas of graph theor y with particular emphasis on trees and planar graphs. He de scribes the inclusion-exclusion principle followed by partit ions of sets which in turn leads to a study of Stirling and Bell numbers. Then follows a treatment of Hamiltonian cycles, Eulerian circuits in graphs, and Latin squares as well as proof of Hall's theorem. He concludes with the constructions of schedules and a brief introduction to block designs. Each chapter is backed by a number of examples, with straightforw ard applications of ideas and more challenging problems.