First, Do No Unjust Harm 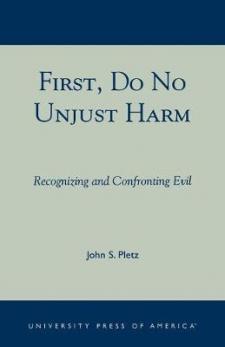 First, Do No Unjust Harm begins from the premise that one of our primary moral duties is to avoid doing wrong and from the observation that people seem to violate that duty not infrequently in their quest to oppose "evil" in the pursuit of some ostensibly "higher good." Since many of these ethical problems appear to be caused by faulty or insufficient analysis of what is "wrong," Pletz has worked out some more rigorous guidelines for such analyses. The recognition of evil begins with the proposition that its three main elements are: (a) harm which has been inflicted on another; (b) responsibility for its resting with one or more persons who have caused it; and (c) the unjust nature of the harm. The author also provides a framework for considering how we can confirm or refute our tentative conclusions about evil, and how we can ascertain their relative degrees of intensity. First, Do No Unjust Harm then proceeds to address the question of how to confront the temptations that we face and the inclinations that we have to do wrong things. Pletz also discusses strategies for actions designed to thwart the evil that others may be doing or intending to do; for even though opposing evil may constitute one of our most dangerous undertakings, we must sometimes do precisely that, if we want the world to be a more moral place. Critical to the success of such efforts, however, is the accurate application of our powers of judgment; for we must be as sure as we can possibly be that what we are opposing is, in fact, wrong and in need of redress.