The Formation of Genesis 1-11 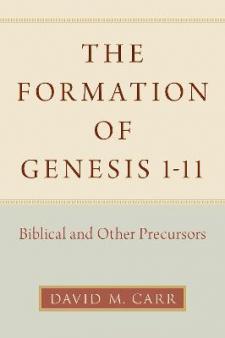 There is general agreement in the field of Biblical studies that study of the formation of the Pentateuch is in disarray. David M. Carr turns to the Genesis Primeval History, Genesis 1-11, to offer models for the formation of Pentateuchal texts that may have traction within this fractious context. Building on two centuries of historical study of Genesis 1-11, this book provides new support for the older theory that the bulk of Genesis 1-11 was created out of a
combination of two originally separate source strata: a Priestly source and an earlier non-Priestly source that was used to supplement the Priestly framework. Though this overall approach contradicts some recent attempts to replace such source models with theories of post-Priestly scribal expansion, Carr
does find evidence of multiple layers of scribal revision in the non-P and P sources, from the expansion of an early independent non-Priestly primeval history with a flood narrative and related materials to a limited set of identifiable layers of Priestly material that culminate in the P-like redaction of the whole. This book synthesizes prior scholarship to show how both the P and non-Priestly strata of Genesis also emerged out of a complex interaction by Judean scribes with non-biblical
literary traditions, particularly with Mesopotamian textual traditions about primeval origins. The Formation of Genesis 1-11 makes a significant contribution to scholarship on one of the most important texts in the Hebrew Bible and will influence models for the formation of the Hebrew Bible as a
whole.