Formosa Under the Dutch 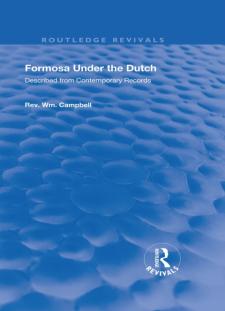 First published in 1903, this volume explored the history of Formosa (now Taiwan) under Dutch occupation between 1624 and 1661, along with shedding some light on its early history. As missionaries were again at work in Formosa, the author found it useful to understand the fate of the island’s previous Catholic colonisation. Part 1 is composed from the Oud en Niew Oost-Indian by Franҫois Valentyn and covers topography, trade and religion. Part 2 covers Catholic Missions to the Island and sheds some light on the issues they faced related to having no vernacular Bibles and other methods of conversion. This will be of particular interest to students and researchers of Catholic world conversion efforts under the Counter-Reformation, in comparison to similar efforts elsewhere in Asia such as Japan, China and India. Part 3 narrates the events which led up to, and culminated in, the nine months’ siege of Fort Zeelandia which ended the rule of the Dutch East India Company over what is now Taiwan.