The Foundation of the Juridico-Political 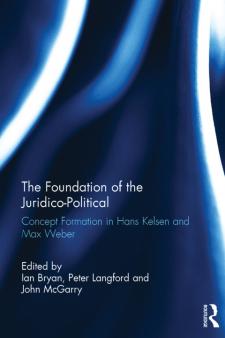 Hans Kelsen and Max Weber are conventionally understood as initiators not only of two distinct and opposing processes of concept formation, but also of two discrete and contrasting theoretical frameworks for the study of law. The Foundation of the Juridical-Political: Concept Formation in Hans Kelsen and Max Weber places the conventional understanding of the theoretical relationship between the work of Kelsen and Weber into question. Focusing on the theoretical foundations of Kelsen’s legal positivism and Weber’s sociology of law, and guided by the conceptual frame of the juridico-political, the contributors to this interdisciplinary volume explore convergences and divergences in the approach and stance of Kelsen and Weber to law, the State, political science, modernity, legal rationality, legal theory, sociology of law, authority, legitimacy and legality. The chapters comprising The Foundation of the Juridical-Political uncover complexities within as well as between the theoretical and methodological principles of Kelsen and Weber and, thereby, challenge the enduring division between legal positivism and the sociology of law in contemporary discourse.