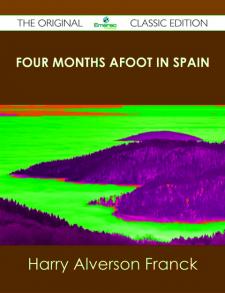 Finally available, a high quality book of the original classic edition of Four Months Afoot in Spain. It was previously published by other bona fide publishers, and is now, after many years, back in print.

This is a new and freshly published edition of this culturally important work by Harry Alverson Franck, which is now, at last, again available to you.

Get the PDF and EPUB NOW as well. Included in your purchase you have Four Months Afoot in Spain in EPUB AND PDF format to read on any tablet, eReader, desktop, laptop or smartphone simultaneous - Get it NOW.

Enjoy this classic work today. These selected paragraphs distill the contents and give you a quick look inside Four Months Afoot in Spain:

Which, being done, I pocketed in express checks and cash the remainder of my resources--to-wit, one hundred and thirty-two dollars--tossed into a battered suit-case a summer's supply of small clothes and a thread-bare costume for ship wear, and set out to discover what portion of the Iberian peninsula might be surveyed with such equipment.

...One of the latter soon swung in against the starboard ladder and there stepped on deck two men in white uniforms, who seated themselves without a word at a table which the commissario some magic of his own, and fell to spreading out impressive documents.

...Sturdy British troopers in snug khaki and roof-like tropical helmets strode past; bare-legged Moors in flowing bournous stalked by in the widening streak of sunshine along the western walls; the tinkle of goat-bells mingled with the rhythmic cries of their drivers, offering a cup fresh-drawn to whomever possessed a copper; now an orange woman hobbled by, chanting her wares; everywhere flitted swarthy little men in misfit rags, with small baskets of immense strawberries which sold for a song to all but the tourists who tailed out behind me.

About Harry Alverson Franck, the Author:

Harry's father Charles was born in Schwerin, Mecklenburg, Germany, but at less than a year old came to the United States with his elder sister and his parents, Heinrich Franck (1823-1877) and Wilhelmina Christina Magdalena Kort (1829-1912), who remained in contact with family in Schwerin; in the course of his travels, Harry visited these relatives at least twice, detailing these visits in Vagabonding Through Changing Germany, but identifying his relatives only as 'a family distantly related to my own'.

...When he was almost 60 years old, Franck obtained a commission as a Major in the Army Air Force and served with the Ninth Air Force in France in the closing days of World War II, where the fighting was still going on.