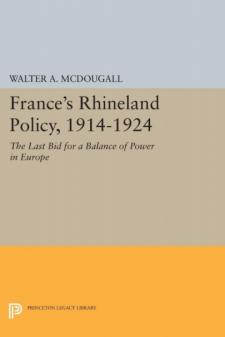 Walter McDougall offers an original analysis of Versailles diplomacy from the standpoint of the power that had the most direct interest and took the first initiatives in the search for a solution to the German problem. The author's new view of the struggle for execution or revision of the Versailles treaty holds sober implications for assessment of the political origins of international anarchy during the 1930s and European integration in the 1950s. He shows that the Treaty of Versailles was unenforceable, and that the French postwar government, far from enjoying predominance in Europe, suffered from financial crisis and economic and political inferiority to Germany. Versailles was thus the &quote;Boche&quote; peace, and the only path to a stable Europe seemed to lie through permanent restriction of German economic and political unity.Originally published in 1978.The Princeton Legacy Library uses the latest print-on-demand technology to again make available previously out-of-print books from the distinguished backlist of Princeton University Press. These editions preserve the original texts of these important books while presenting them in durable paperback and hardcover editions. The goal of the Princeton Legacy Library is to vastly increase access to the rich scholarly heritage found in the thousands of books published by Princeton University Press since its founding in 1905.