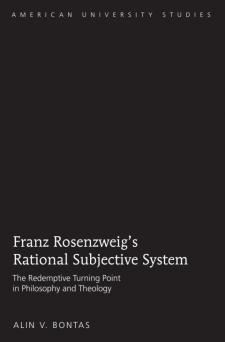 Franz Rosenzweig’s The Star of Redemption is best understood as a rational subjective system, and as such, as the redemptive turning point in philosophy and theology in general. In asserting Rosenzweig’s essential commitment to a «new» systematic conception of thinking as the most basic, deepest, and comprehensive intellectual procedure, Franz Rosenzweig’s Rational Subjective System sheds light on the extensive method of the Star and shows it to be rooted in a fundamental rethinking of the methodological and logical-metaphysical resources of Kant, most especially of the transcendent metaphysics of the psychological, cosmological, and theological substances (i.e., the «threefold nothing», or entia rationis). The true radicality and originality of Rosenzweig, Bontas claims, is the exposition of the «rational subjective» approach to substance and knowledge on the «logical form» of the hypothetical thought (i.e., the modal relation of logical consequence between original and non-natural ground and phenomenal consequence, that positively establishes the wholly final and non-ideal destinations of redemption), which valorizes the alliance between pure reason and revelation disrupted by the Kantian epistemology. The title, The Star of Redemption, indicates exactly this long rational and not exclusively mundane «new systematic principle» of coherent and reliable knowledge, which is ultimately shown to be «true» and «right» from a «self-examining» subjective perspective and thereby justified.