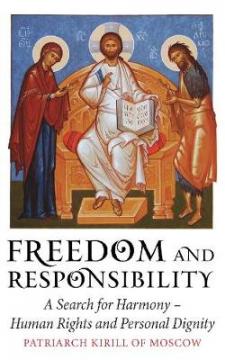 Freedom and Responsibility: A Search for Harmony is a remarkable personal vision of a `multi-polar' future for the world by the leader of the Russian Orthodox Church.

Two antagonistic systems are ranged against each other, one liberal, secular and humanistic, the other religious and traditionalist. Patriarch Kirill draws on the bitter experience of the Russian people in the twentieth century to illustrate the dangers of totalitarianism and how grave the break with one's spiritual roots can be for civilization.

Rather than a struggle to the death between competing value systems, he proposes instead the way of co-existence, grounded in mutual respect for moral categories that are common to all. He calls not for liberal values to be abandoned but to be supplemented by other cultural and philosophical systems, and to create a harmony between the two, not just with declarations of mutual friendship and respect but also through the reform of law and global governance.

The Patriarch shares the concerns of Pope Benedict XVI for the dangers of moral relativism. `The Catholic and the Orthodox Churches are, it seems, the only allies in the tough struggle between secular liberalism infected with the bacillus of self-destruction and bearers of the forward-looking idea of human salvation.'

Freedom and Responsibility is an invaluable introduction to the thinking of the Russian Orthodox Church on the relations between the Church and the wider world.