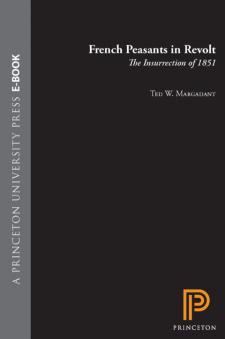 The triumphant rise of Louis Napoleon Bonaparte over his Republican opponents has been the central theme of most narrative accounts of mid-nineteenth-century France, while resistance to the coup d'etat generally has been neglected. By placing the insurrection of December 1851 in a broad perspective of socioeconomic and political development, Ted Margadant displays its full significance as a turning point in modern French history. He argues that, as the first expression of a new form of political participation on the part of the peasants, resistance to the coup was of greater importance than previously supposed. Furthermore, it provides and appropriate testing ground for more general theories of peasant movements and popular revolts.Using manuscript materials in French national and departmental archives that cover all the major areas of revolt, the author examines the insurrection in depth on a national scale. After a brief discussion of the main characteristics of the insurrection, he analyzes its economic and social foundations; the dialectic of repression and conspiracy that fostered the political crisis; and the armed mobilizations, violence, and massive arrests that exploded as the result. A final chapter considers the implications of the insurrection for larger issues in the social and political history of modern France.