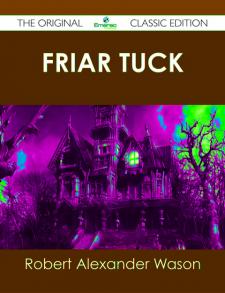 Finally available, a high quality book of the original classic edition of Friar Tuck. It was previously published by other bona fide publishers, and is now, after many years, back in print.

This is a new and freshly published edition of this culturally important work by Robert Alexander Wason, which is now, at last, again available to you.

Get the PDF and EPUB NOW as well. Included in your purchase you have Friar Tuck in EPUB AND PDF format to read on any tablet, eReader, desktop, laptop or smartphone simultaneous - Get it NOW.

Enjoy this classic work today. These selected paragraphs distill the contents and give you a quick look inside Friar Tuck:

When my memory’s in a good humor, I like to start a pipe and lean back and just watch old scenes over again, the same as if I was in a the-ater; and I can see every twinkle in a pair o’ well-known eyes, which have been lookin’ up through six feet of earth for this many a long year, and I can hear—actually hear—the half tones ripplin’ through voices which have no more part in my to-day than the perfume o’ last year’s flowers; and then, like as not, my memory’ll lay her ears back and refuse to confide what I did with my shavin’ soap.

...Eugene started in by mowin’ away the whiskers, an’ it was a long an’ painful job; ’cause it was almost impossible to tell where they left off an’ ol’ man Dort began, an’ then they was so cluttered up with grit an’ dead hair and kindry deb-ris that his scissors would choke up an’ pull, an’ then ol’ man Dort would bob up his head an’ yell out a bunch o’ profanity, and Eugene would stand back an’ say that he was a barber, not a clearer of new ground, an’ that the job ought to be done with a scythe and hoe, not with scissors an’ razor.

About Robert Alexander Wason, the Author:

Army (artillery) for nine months during the Spanish American War (1898-99), and worked in a wide variety of jobs and places before settling down to a career writing, with his westerns incorporating items from his life's experiences. In addition to clerking for his father, he worked as an office boy, a grip man on the San Francisco cable cars, a miner in a Nevada mercury mine, and as a farmer in Delphi, Indiana.