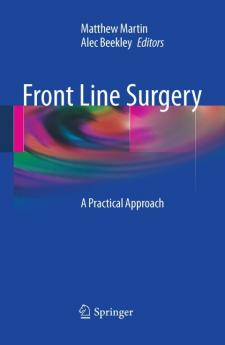 Both editors are active duty officers and surgeons in the U.S. Army. Dr. Martin is a fellowship trained trauma surgeon who is currently the Trauma Medical Director at Madigan Army Medical Center. He has served as the Chief of Surgery with the 47th Combat Support Hospital (CSH) in Tikrit, Iraq in 2005 to 2006, and most recently as the Chief of Trauma and General Surgery with the 28th CSH in Baghdad, Iraq in 2007 to 2008. He has published multiple peer-reviewed journal articles and surgical chapters. He presented his latest work analyzing trauma-related deaths in the current war and strategies to reduce them at the 2008 annual meeting of the American College of Surgeons. Dr. Beekley is the former Trauma Medical Director at Madigan Army Medical Center. He has multiple combat deployments to both Iraq and Afghanistan, and has served in a variety of leadership roles with both Forward Surgical Teams (FST) and Combat Support Hospitals (CSH).