Functional Equations and Inequalities with Applications 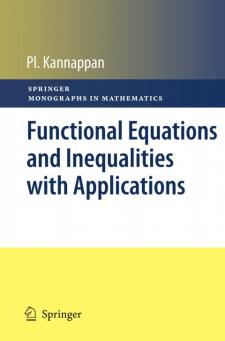 As any human activity needs goals, mathematical research needs problems. -David Hilbert Mechanics is the paradise of mathematical sciences. -Leonardo da Vinci Mechanics and mathematics have been complementary partners since N- ton's time, and the history of science shows much evidence of the bene?cial in?uence of these disciplines on each other. Driven by increasingly ela- rate modern technological applications, the symbiotic relationship between mathematics and mechanics is continually growing. However, the increasingly large number of specialist journals has generated a duality gap between the partners, and this gap is growing wider. Advances in Mechanics and Mathematics (AMMA) is intended to bridge the gap by providing multidisciplinary publications that fall into the two f- lowing complementary categories: 1. An annual book dedicated to the latest developments in mechanics and mathematics; 2. Monographs, advanced textbooks, handbooks, edited volumes, and selected conference proceedings. The AMMA annual book publishes invited and contributed compreh- sive research and survey articles within the broad area of modern mechanics and applied mathematics. The discipline of mechanics, for this series, includes relevantphysicalandbiologicalphenomenasuchas:electromagnetic,thermal, viii Series Preface and quantum e?ects, biomechanics, nanomechanics, multiscale modeling, - namical systems, optimization and control, and computation methods. - pecially encouraged are articles on mathematical and computational models and methods based on mechanics and their interactions with other ?elds. All contributions will be reviewed so as to guarantee the highest possible sci- ti?c standards. Each chapter will re?ect the most recent achievements in the area.