The Future of European Contract Law 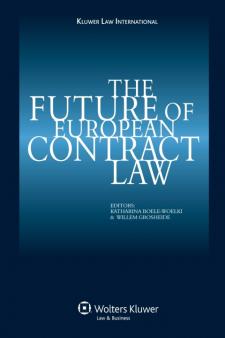 Professor Ewoud Hondius has been one of the most successful architects of comparative law research and education in The Netherlands. He has undertaken numerous efforts to advocate the unification and harmonization of private law by means of comparative studies which during his career have been welcomed all over the world. His understanding of the law of many jurisdictions is exceptional and his global network is impressive. He is a great European legal scholar and an ambassador for Dutch law, as witnessed by his innumerable publications.

This book has been compiled in order to appropriately admire Honduis' inspiring contributions to the elaboration of European contract law. The general topic of The Future of European Contract Law has been divided into five themes, many of them coinciding with the special interests of the honoured scholar himself:

The wealth of material in this book contains a treasure of observations and visions of where contract law in Europe currently stands, as well as on how it should develop in the future. A collection of outstanding authors have contributed to this book. As a result, it represents the current legal scholarship in the field of European contract law. This book is bound to be of great value, not only to academics, but also to lawyers involved in cross-border practice such as international business and consumer transactions.