Gallipoli : the Egerton Diaries and Papers 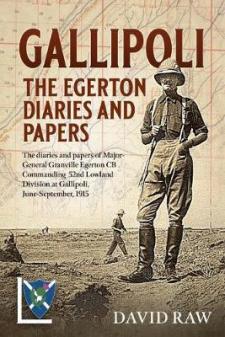 As Commander of 52nd Division, Granville Egerton kept a detailed long daily diary of the events, conditions and personalities at Gallipoli between June and September, 1915.

He is highly critical of the decisions and tactics of the campaign as well as of his C-in-C Sir Ian Hamilton and Corps Commander Aylmer Hunter-Weston. 'Ian Hamilton can't help himself from being a liar'.

The daily long diary was sent by King's Messenger to his mother in Bournemouth. It gives a vivid picture of life on the Peninsula. The long diary is now deposited in the National Archives.

He also details the impact of the Gretna Railway disaster before embarkation.

He also kept a short diary which details the deteriorating state of his own health, exacerbated by local conditions. The short diaries are in the National Library of Scotland.

In addition Egerton supplied evidence to the Dardanelles Commission and kept post-war Journals with an evaluation of the campaign and the views of his own circle of friends. He records a critical conversation with Kitchener before embarkation. The papers and journals are in the National Library of Scotland and in the Imperial War Museum.

The author reproduces the diaries and papers in full with detailed notes and analysis in chronological order.