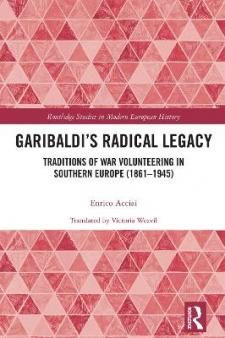 Between the two world wars, thousands of European antifascists were pushed to act by the political circumstances of the time. In that context, the Spanish Civil War and the armed resistances during the Second World War involved particularly large numbers of transnational fighters. The need to fight fascism wherever it presented itself was undoubtedly the main motivation behind these fighters' decision to mobilise. Despite all this, however, not enough attention has been paid to the fact that some of these volunteers felt they were the last exponents of a tradition of armed volunteering which, in their case, originated in the nineteenth century. The capacity of war volunteering to endure and persist over time has rarely been investigated in historiography. The aim of this book is to reconstruct the radical and transnational tradition of war volunteering connected to Giuseppe Garibaldi's legacy in Southern Europe between the unification of Italy (1861) and the end of the Second World War (1945). This book seeks to provide a comprehensive analysis of the long-term, interconnected, and radical dimensions of the so called Garibaldinism.