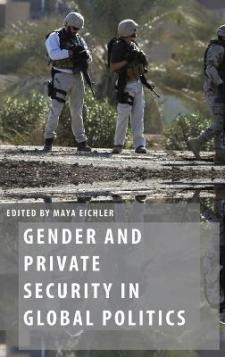 For two hundred years the provision of military security has been a central and defining function of the modern nation-state. The increasing reliance on private military and security companies in contemporary conflict marks a fundamental transformation in the organization of military violence, and it raises issues of accountability and ethics that are of particular concern to feminists. This privatization of force not only enables states to circumvent citizens'
democratic control over questions of war and peace, but also undermines women's and minority groups' claims for greater inclusion in the military sphere.

Gender and Private Security in Global Politics brings together key scholars from the fields of international relations, security studies, and gender studies to argue that privatization of military security is a deeply gendered process. The chapters employ a variety of feminist perspectives, including critical, postcolonial, poststructuralist, and queer feminist perspectives, as well as a wide range of methodological approaches including ethnography, participant-observation, genealogy,
and discourse analysis. This is the first book to develop an extended feminist analysis of private militaries and to draw on feminist concerns regarding power, justice and equality to consider how to reform and regulate private forces.