A General History and Collection of Voyages and Travels 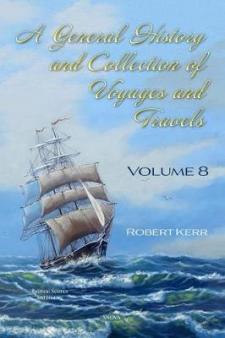 A General History and Collection of Voyages and Travels by Robert Kerr is an 18 volume set that contains the complete history of the origin and progress of navigation, discovery, and commerce, by sea and land. In determining upon an era for the commencement of this work, Kerr was led, from a consideration of the accidental discovery of Iceland by the Norwegians in the ninth century, to adopt that period as the beginning of the series, both because the commencement of modern maritime discovery took place during the reign of a British sovereign, and because we derive the earliest written accounts of any of these discoveries from the pen of that excellent prince. It is true that the first accidental discovery of Iceland appears to have been made in 861, eleven years before the accession of Alfred to the throne; yet, as the actual colonization of that island did not take place till the year 878, the seventh of his glorious reign, we have been induced to distinguish the actual commencement of maritime discovery by the modern European nations as coinciding with his era.