The Genesis of General Relativity 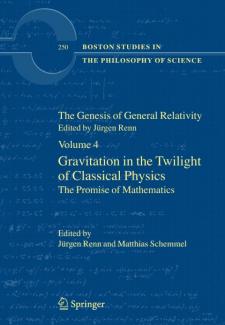 The transition from classical to modern physics in the ?rst half of the twentieth c- tury by quantum and relativity theories affected some of the most fundamental notions of physical thinking, such as matter, radiation, space, and time. This tran- tion thus represents a challenge for any attempt to understand the structures of a s- enti?c revolution. The present four-volume work aims at a comprehensive account of the way in which the work of Albert Einstein and his contemporaries changed our understanding of space, time, and gravitation. The conceptual framework of classical nineteenth-century physics had to be fundamentally restructured and reinterpreted in order to arrive at a theory of gravitation compatible with the new notions of space and time established in 1905 by Einstein's special theory of relativity. Whereas the classical theory of gravitation postulated an instantaneous action at a distance, Einstein's new relativistic kinematics rather suggested an analogy between the gravitational ?eld and the electromagnetic ?eld, propagating with a ?nite speed. It is therefore not surprising that Einstein was not alone in addressing the problem of formulating a theory of gravitation that complies with the kinematics of relativity t- ory. The analysis of these alternative approaches, as well as of earlier alternative approaches to gravitation within classical physics, turns out to be crucial for identi- ing the necessities and contingencies in the actual historical development.